History
of Towel
One of the oldest arts in human history is undoubtedly the art of weaving. Turkish fabrics have an important place in global fabric production in terms of touch, material, and pattern richness. The fabrics, which are woven with expert technique and different textures and yarns, can generally be called Ottoman fabrics.
They were woven in palace workshops for the sultan and his family members and sometimes used for the furnishing of the palace. During the times of the Ottoman Empire, the robust and strong administrative system ensured the organization of palace art and craft without compromising the quality of palace weaving. The art of hand-weaving in the Ottoman palace was complex in terms of its patterns, colors. Dexterity and the ability to interpret were the greatest characteristics of master weavers. The history of the Turkish towel dates back 1600 years. The Turkish bath, an important part of Turkish culture, brought the need for towels with it. According to research, the first weaving workshop was found in Anatolia. Bursa, which is at the forefront of silkworm farming and silk weaving, is considered to be the place where the first towel was produced. Like Bursa, Denizli has a long-established history in the production of towels and bathrobes and is currently a leader in terms of patenting, branding, and production volume.
Meet the homeland of the towel

The Homeland of the Towel
Türkiye is one of the most important suppliers of towels in the world. The Turkish towel industry, where special weaving techniques and high-quality Turkish cotton are used, is also a cultural heritage of the Turkish bath traditions that have been maintained for centuries. The majority of Turkish towel exports are carried out from Denizli and the Turkish towel is a brand in its own right, with studies prioritizing quality and design. Towel producers are one of the main suppliers in sectors such as tourism and health.
With an annual towel export of approximately $600 million, it has an 8.5% share of the world’s total towel exports, which are valued at $7 billion. Türkiye is the 4th largest towel exporter in the world. The Turkish towel sector, which is highly specialized in factors such as quality, durability, comfort, and aesthetics is preferred by global consumers.
Homeland of Craftsmanship
Towels are divided according to the type of use, such as hand, face, or head towels, bath towels, beach towels, and bathrobes. A type of fabric called towel fabric is used in its production. Towel fabric is generally made from cotton and linen weaving. A towel fabric structure in the classical sense is a one where one or both sides of the fabric are looped.
The characteristic of this type of fabric is that it is washable and resistant to dyeing and aging, while also having a soft texture. Towel weaving techniques are used for other textile products too, but what separates the towel from other textile products is the use of pile yarn. Other types of yarns are also used alongside cotton for the production of towels, depending on the desired use. Türkiye's raw material wealth and quality make Turkish towels the world's best quality towels. 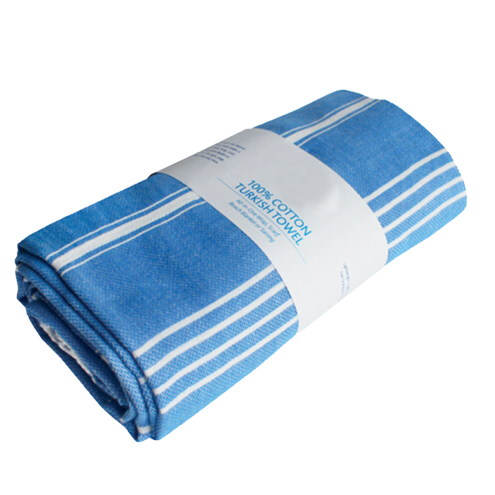 Türkiye is the Homeland of the Towel

National Advantages
There is no doubt that our country is world-famous in the field of textiles. The culture pertaining to towels, which emerged as a result of the traditions of the Turks and the production possibilities of the Anatolian geography, holds an important place in Türkiye’s daily life and in industrial terms.

Towel production around the world is based on the history of Turkish towel weaving and has become specialized accordingly. In our country two cities, in particular, come to the fore when it comes to the production of towels, Bursa and Denizli. These cities, known for their textile production, are very advanced in towel production and branding.

Turkish towels, with a history dating back 1600 years, are one of Türkiye’s highest volume export products, so much so that towels and bathrobes produced in Türkiye today are exported to more than 186 countries and reach an annual average of $600 million in exports. This provides an important contribution to the Turkish economy and creates opportunities for introducing the Turkish towel to the entire world.

The Homeland of Bath Culture

When thinking of Turkish towels and Turkish baths, we must not forget the loincloth. Although it is used in baths, it is also a clothing accessory used in Bursa and Denizli and in the Black Sea and Central Anatolia regions. Because of this feature, there are embroideries on it, and the Turkish habit of embroidering towels can be somewhat owed to this connection.

The advantages of Türkiye's production offer the possibility to export the products of the highest quality at an affordable price.

Türkiye, which has also developed the production of bathrobes along with towels, has created a brand named “Turkish Towel” and has registered this brand worldwide through its economic development support platform “Turquality”. The towels used by the four finalist teams of the EuroLeague basketball competition, which was held in Istanbul, were towels produced in Denizli under the “Turkish Towel” brand, and thus an important step was taken for both the country and the promotion of its towels.

The most important feature of the looped structure in towel weaving is water absorption. Türkiye produces the world's highest quality and most durable towels with its high-quality raw materials and experienced artisans.

From Turkey to Everywhere

Turkey's geopolitical position and its three sides are surrounded by the Mediterranean, Aegean, and the Black Sea, so it can easily reach almost anywhere in the world. 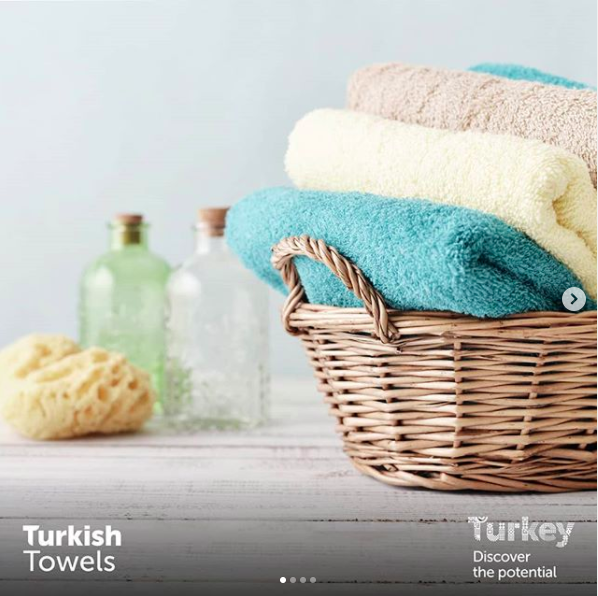 These towels are waiting for you. Now is the time to import them!